Turning the humble stringed instrument into an entire ecosystem, the LAVA ME 3 is easily the most advanced guitar you can get your hands on. Aside from being a semi-acoustic guitar that works equally well as an analog instrument and a standalone electric one, The LAVA ME 3 also comes with its own dedicated touch-sensitive tablet panel on the top that lets you access a host of features for both amateur and professional uses. From simply learning chords and playing the metronome to actually letting you create loops and add effects, the ‘Smart Guitar’ packs everything you need in a guitar… whether you’re jamming in a room or performing on stage. 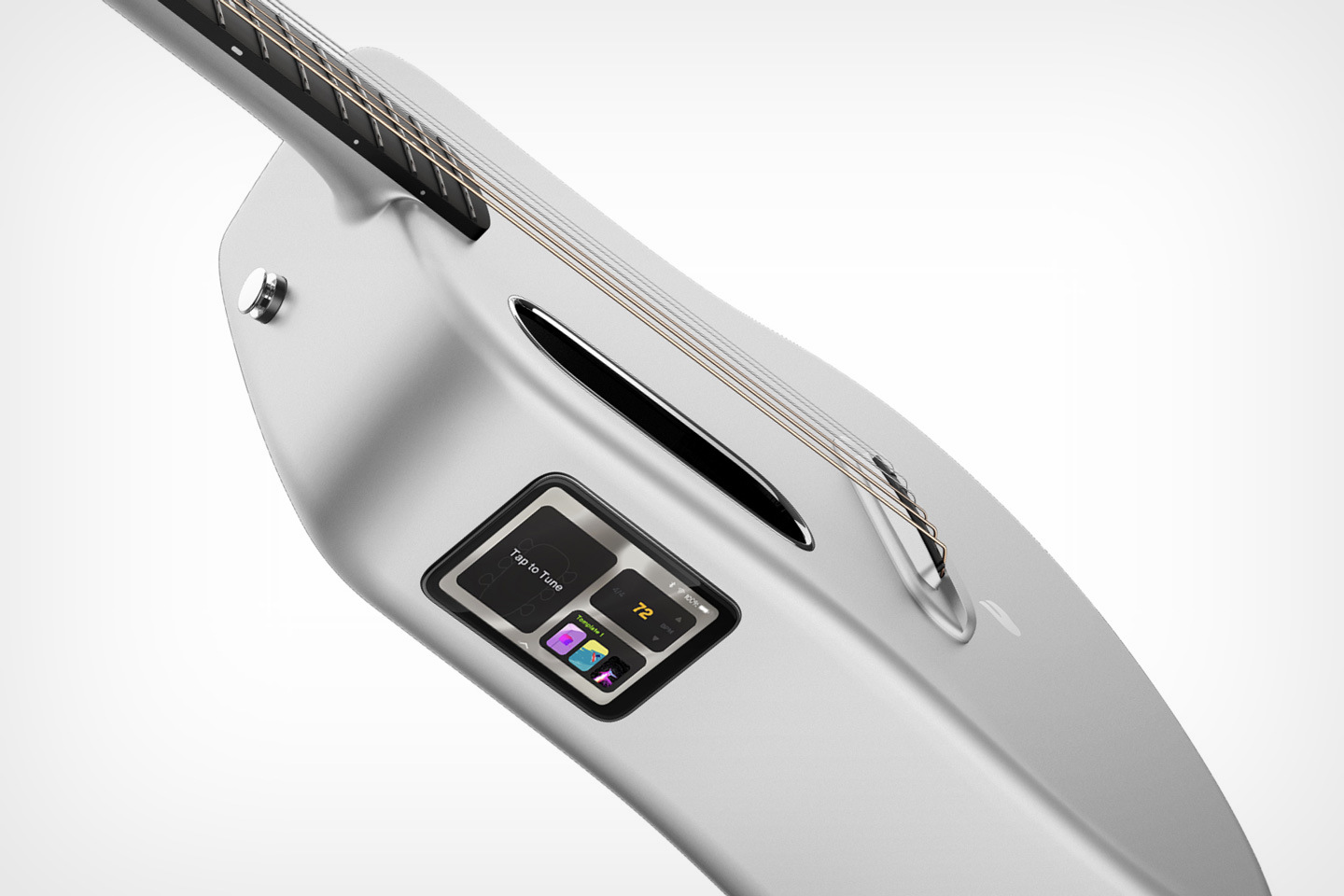 Debuting just 7 months after the LAVA ME 2 was announced, the ME 3 sports the same iconic carbon-fiber body with the vivid color schemes and the offset acoustic chamber-hole that makes the guitar so unmistakably memorable. Like its predecessors, the LAVA ME 3 sports a honeycomb internal structure that gives the guitar its sheer strength (there’s no smashing this bad boy on stage) while also creating an acoustic chamber that emits a rich, balanced sound when you play the instrument. However, the most significant upgrade as far as the LAVA ME 3 goes is the iPad-esque tablet that comes built right into the guitar’s upper surface. This tablet is what effectively turns the ME 3 from a regular semi-acoustic guitar into a smart guitar… probably making it the first-ever guitar to have its own dedicated Operating System – and while that sounds incredibly gimmicky, in reality, it’s probably the most game-changing feature a guitar could have. 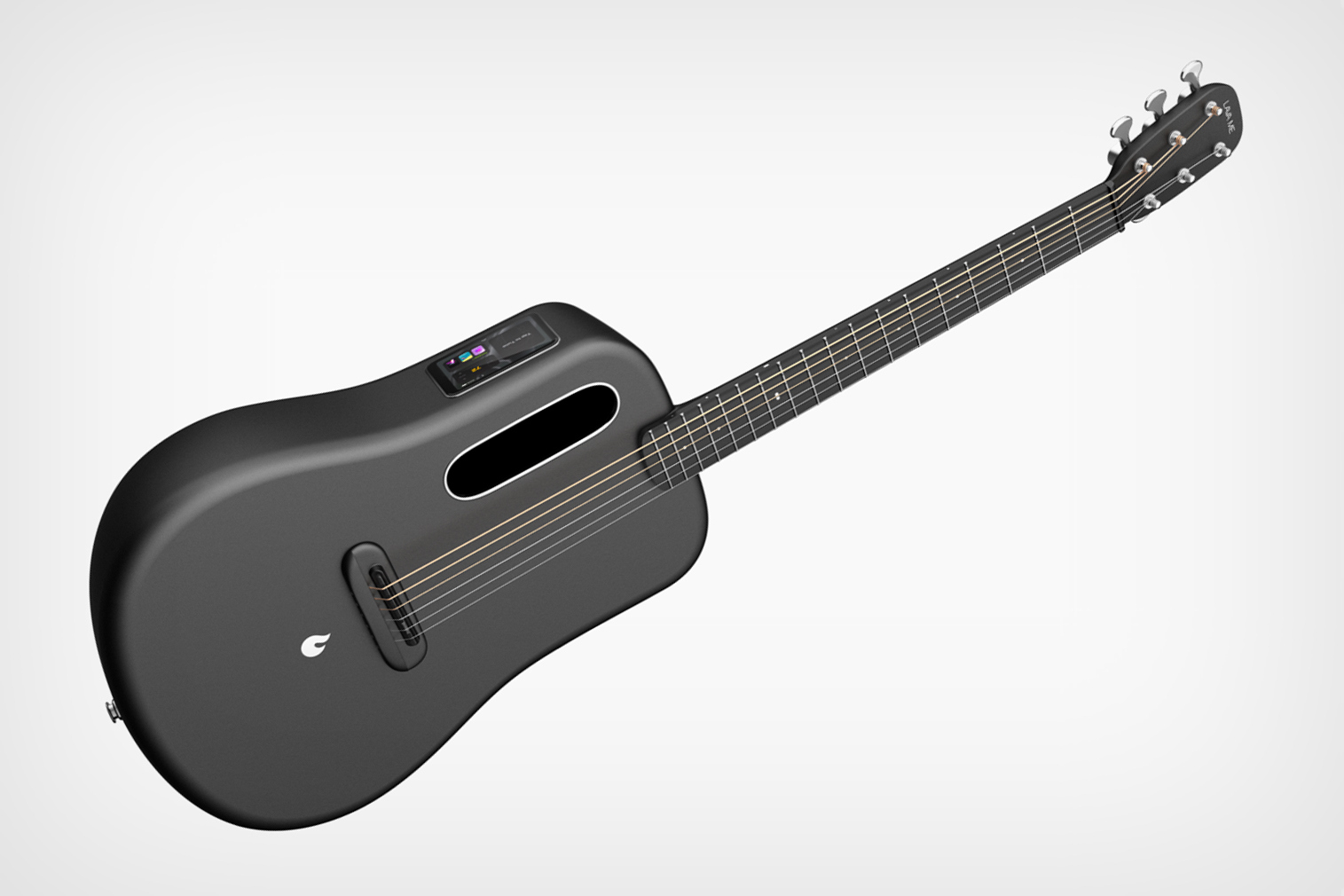 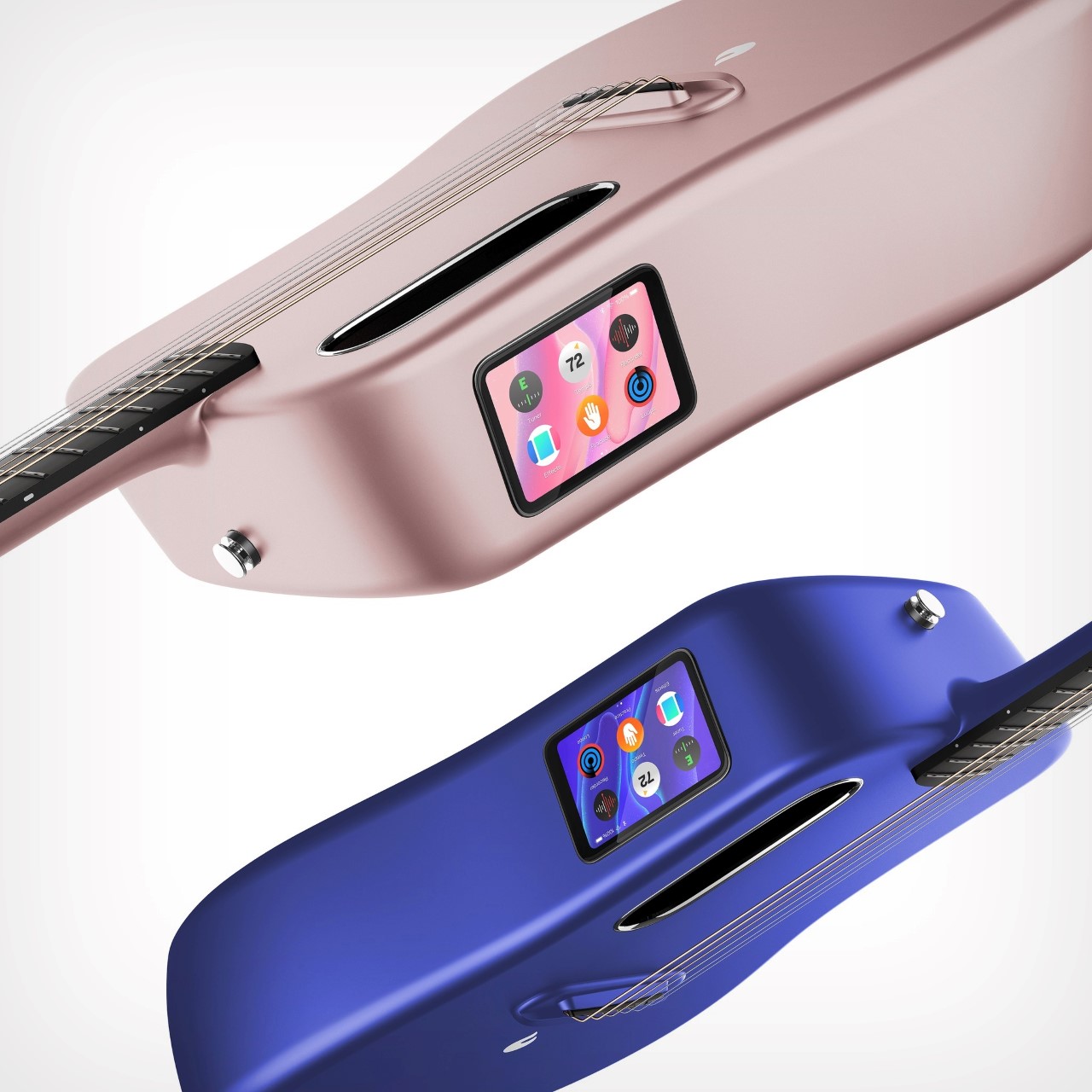 The 3.5-inch touchscreen interface runs LAVA’s HILAVA OS, equipped with a myriad of apps that let you do everything from tune to learn, practice, jam, perform, compose, and even record. While there’s a lot to unpack there, the guitar itself is still quite traditional in the way it works. You can use it as an acoustic instrument, jamming on the guitar just like if it were a regular wooden Spanish guitar, or you could ‘switch it on’ and have the guitar’s internal speakers play your music with amplification, just like an electric guitar. The internal speakers pump music out of the offset acoustic chamber hole, or conversely, the LAVA ME 3 even sports a traditional 1/4-inch audio output like most electric guitars, letting you hook it to an external amp. 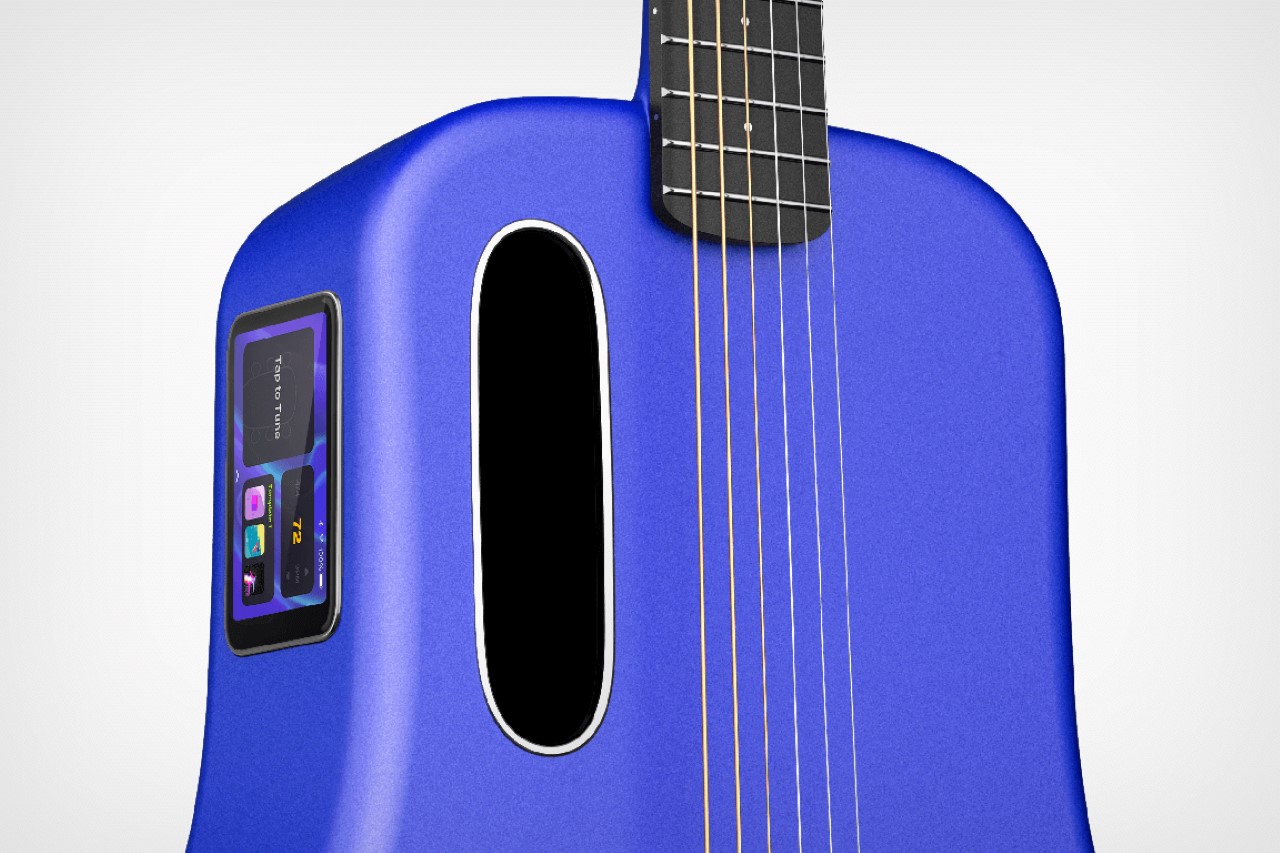 Onto LAVA ME 3’s most exciting feature – its ‘computer’. The touch display measures 3.5-inches diagonally (about the same as an iPhone 4) and runs on LAVA’s own HILAVA OS that packs a treasure-trove of features. Just off the bat, the touchscreen lets you do the basic stuff like providing a metronome and helping you tune your guitar (to even alternate tuning arrangements), but it also unlocks a bunch of other features, notably working as a tutorial machine that lets people learn notes, scales, arpeggios, chords, and even songs. A built-in microphone can even track progress in real-time, alerting you when you’ve made a mistake and ensuring you hit all the right notes. The LAVA ME 3’s Practice App turns the guitar into a teacher, helping novices learn chords to their favorite songs while also guiding them through chord transitions, strumming patterns, and scales… all skills needed to go from amateur to seasoned veteran. 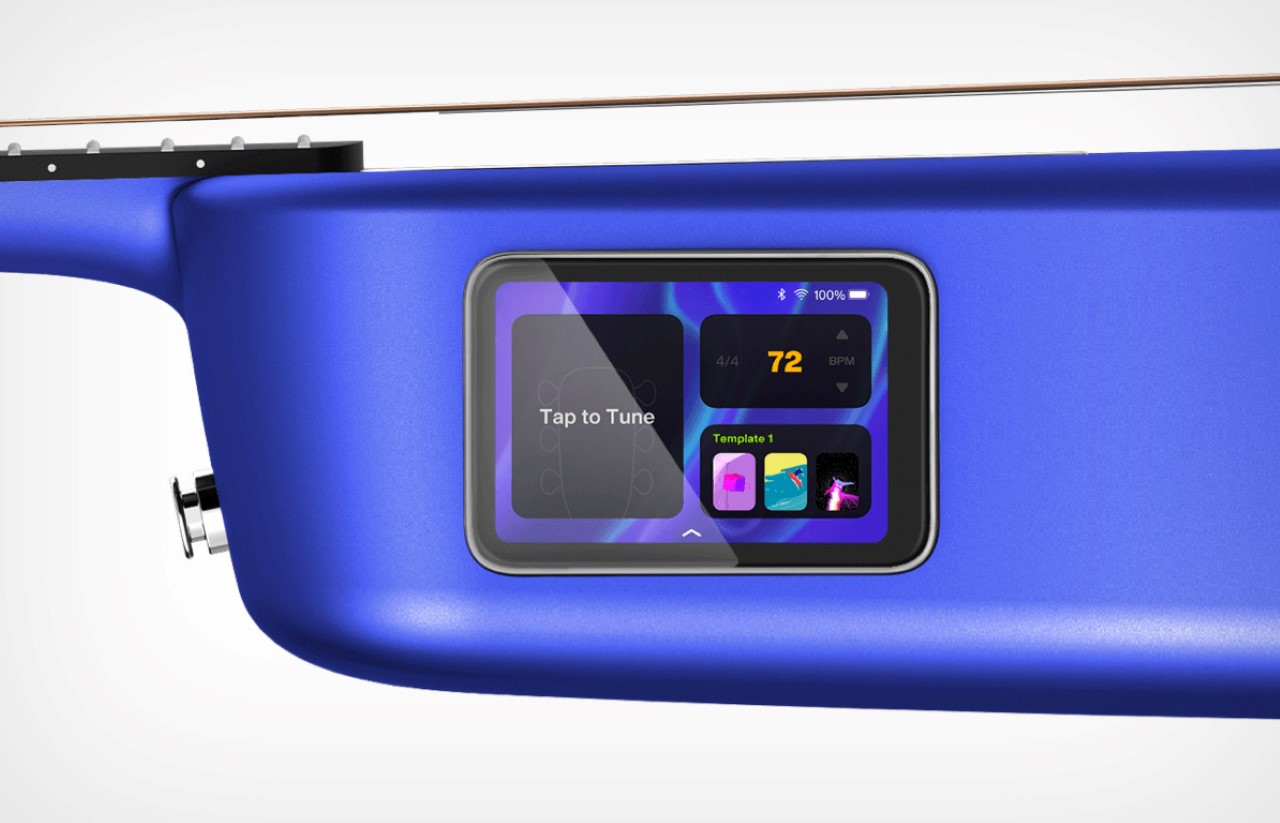 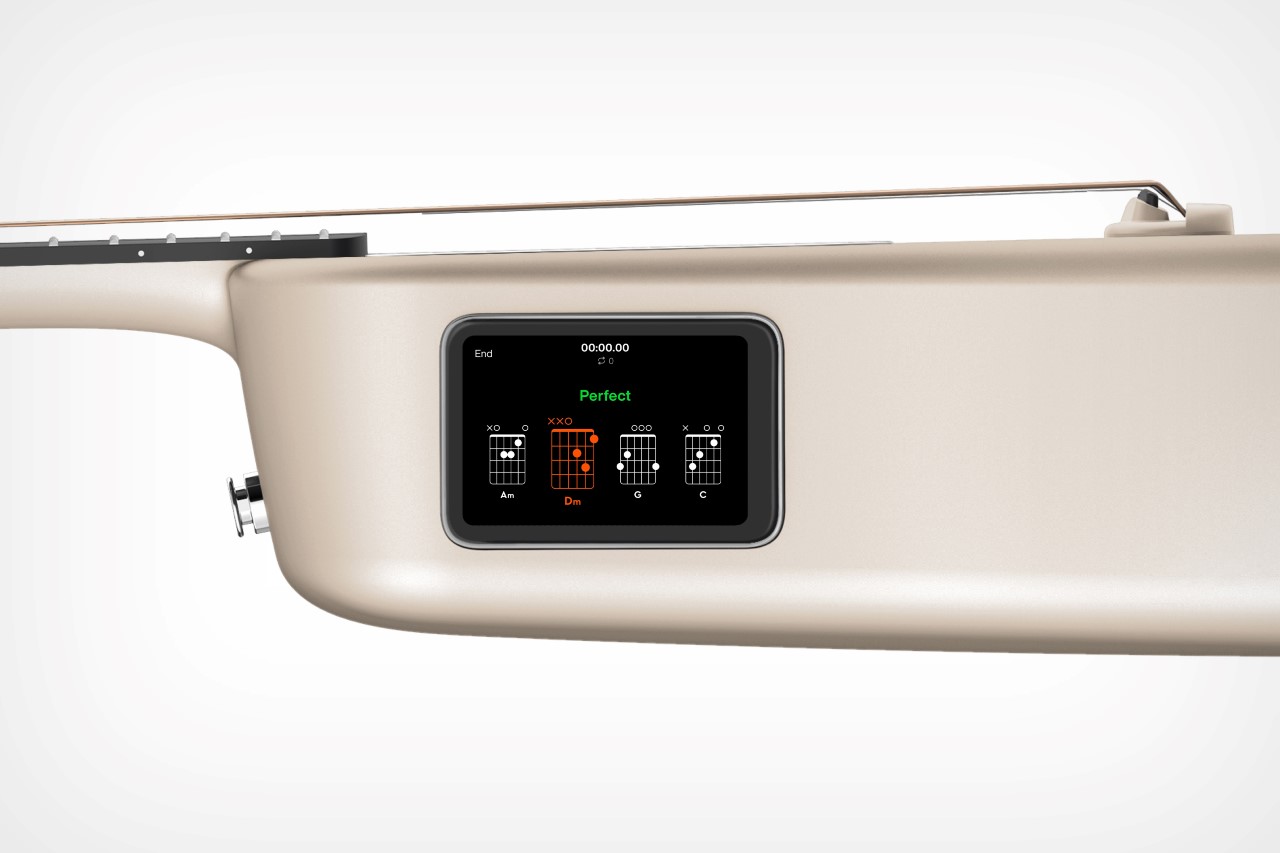 For the seasoned veterans, the LAVA ME 3’s touchscreen practically functions as a built-in DAW (Digital Audio Workstation) to let you experiment with effects, loops, and even multitracks. The Effects app is an ever-expanding library of filters and effects that you can layer onto your sound (making the guitar effectively sound like any instrument you want), and you can modulate each individual parameter too, from EQ to frequency, envelope, etc. Once you’ve got the sound you want, you can either jam to preset background music preparations (almost like guitar karaoke), or create your own by designing loops, layering samples, remixing riffs, and creating multitrack arrangements… all without a laptop, a phone, or a single cable. The guitar handles everything internally and even lets you record your sets and export them as stems or tracks, or even share them with LAVA’s own online community of budding artists and musicians. 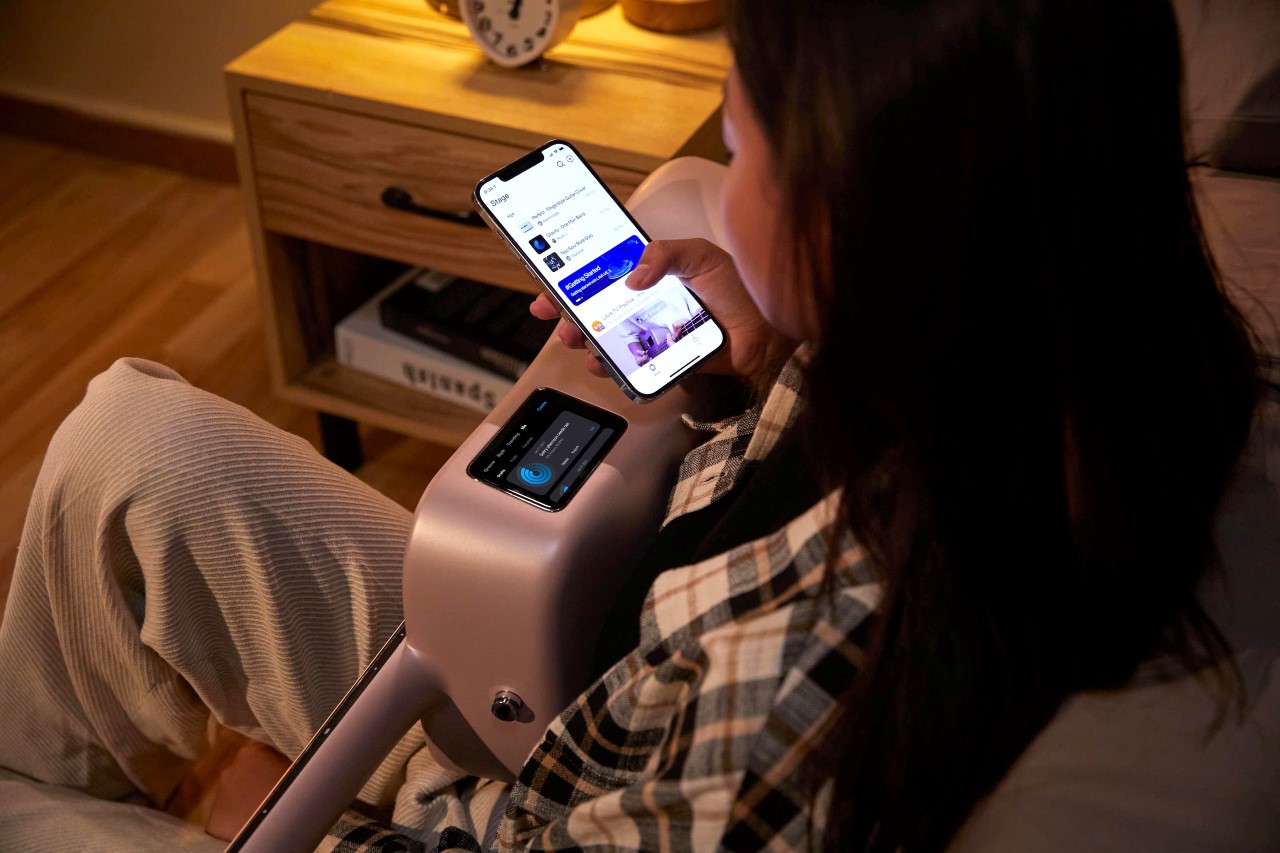 The Smart Guitar comes priced at $999, which sounds absolutely batshit outlandish to begin with, but makes sense when you realize what you’re paying for. It’s not just the carbon fiber outer body, the semi-acoustic nature, the touchscreen, or that diverse ecosystem of features housed within the HILAVA operating system, it’s all of them combined, which effectively turns the guitar into a one-stop piece of equipment that replaces every other musical gear you’d need, from amplifiers to microphones, expensive pedals, software, or even a guitar teacher for that matter! The LAVA ME 3 also comes with a built-in 8000mAh battery that provides 9 full hours of continuous play-time or 2 weeks of standby… although when it’s discharged it can still be used as a regular acoustic guitar. The ME 3 also sports a USB-C charging port on its side (right near the 1/4-inch audio input), and if all that jazz wasn’t fancy enough, LAVA also sells an uber-futuristic $129 wireless charging dock for your fancy smart guitar!

VR gets a fourth sense!

There are a couple of reasons VR is still not a completely immersive experience. Firstly, the eye immediately knows it’s being tricked when it can’t…

The effect of a full body shower is not only that of washing the dirt of your skin. A shower is also a ritual that…

Add a Touchbar to your keyboard with this sleek, infinitely customizable touchscreen gadget!

The Touchbar on the MacBook honestly felt like a solution without a concrete problem. It was designed to be a highlight feature without a highlight…

Meet the most beautiful home-cinema projector that ever lived…

How do you make a projector that looks like a cross between a telescope and an artistic, sculptural element integrated into your decor? You take…